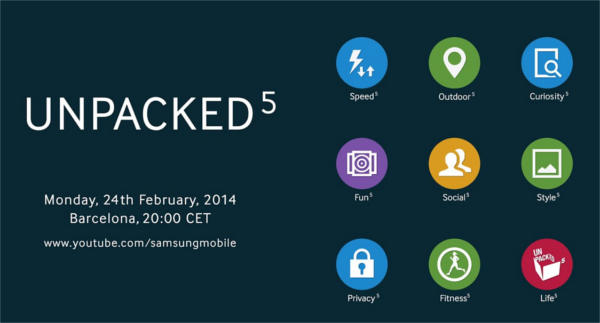 Following the teaser of the galaxy S5 launch date, Samsung now teases us with a new picture related to the unpacked event.

This time, one prominent element in the teaser is the round shape of app icons.

Of course, this does not just mean shape changes in icons of apps: from square to round.

It probably hints some radical changes in TouchWiz, which is widely criticized as a Gingerbread-age Android UI.

Actually, there are no major changes in TouchWiz in last 3-4 years.

In January, when Samsung revealed the giant tablets (Galaxy Note Pro and Galaxy Tab Pro) , we noticed the new user interface for TouchWiz. But the controversial Magazine style UI is obviously not suitable for a 5″ device.

The old-fashioned, bloated and bloodily-slow TouchWiz really needs  a revamp.

What actually are the changes in Galaxy S5 UI? We will only know them on February 24.

Anyway, the Galaxy S5 launch will determine the destiny of Samsung in mobile market.… Read the rest