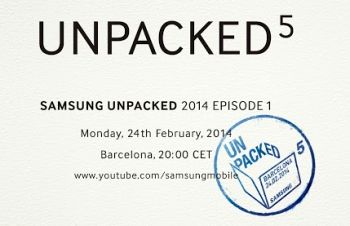 Samsung just announced that they will host an “Unpacked 5” event at Mobile World Congress on 24th February.

This is not another  Galaxy S5 rumor.
Now Samsung reveals the Galaxy S5 launch date. The next question is when the  handset will be available.

If we check the release history of Samsung Galaxy S, S2, S3 and S4, it is not difficult to estimate Galaxy S5 will be released in late March to early April (4-6 weeks after the Galaxy S5 launch date).

Due to the lackluster sales of Galaxy S4, it is understandable that Samsung desperately wants to release Galaxy S5 as early as possible. Naturally, this Galaxy S5 launch date is a bit earlier than that of Galaxy S4.

Although Samsung is the No.1 Android  phone manufacturer, and they can easily maintain this position in next one or two years, the margin for error becomes less and less thanks for the competition from Apple, LG, Motorola (now owned by Lenovo, which has very deep marking pocket), HTC, Sony, and maybe even Nokia.

Samsung climbed to the top position through Galaxy S2 and S3. Galaxy S4 is more or less a failure.  Galaxy S4 packed so many half-baked features. Some users try to disable some of them once they get the handset. Galaxy Note 3 made some corrections on this.

The Galaxy Note  Pro and Galaxy Tab Pro introduced a new Magazine UI.  As both of them will be  available after February 13, we have no chance to test it for real usage.

The Galaxy S5 launch date is critical for Samsung.  After this launching event, we will have a clear picture whether Samsung starts to go downwards or upwards.

So, book your calendar for February 24, Galaxy S5 launch date.

As  usual, the event will be live-streamed through YouTube.… Read the rest